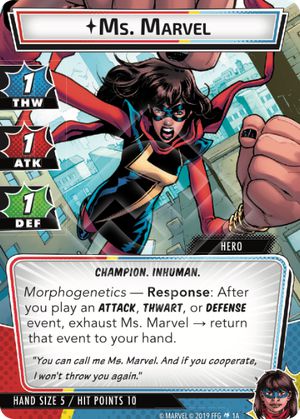 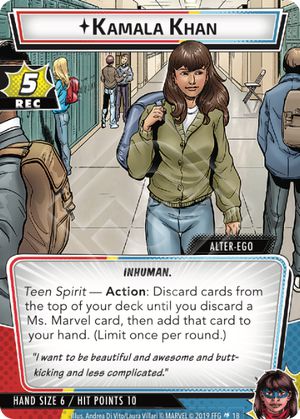 While Kamala herself tells us that she wants to be beautiful and awesome and butt-kicking and less complicated, actually playing as her isn't always simple.

It’s all just so weird at first glance. Morphogenetics is one of the most transformative bits of text in the whole game, in one fell swoop revealing the core of the character’s design and explaining that eyebrow-raising 1-1-1 stat line. “Ohhhhh” the player says, understanding that Ms. Marvel is going to be loading her deck with events, and is not going to be exhausting for basic powers basically ever.

And using those basic powers is probably something you've been taking for granted as you play other heroes. Exhausting to use a basic is a consistent source of decent chunks of damage and thwarting. Spider-Woman's deck is entirely built around boosting her stats and exhausting to use them. It’s a huge part of the game, and Ms. Marvel just ignores it, virtually always exhausting to recur an event instead.

The value of this isn’t necessarily obvious, and so it’s absolutely worth asking whether it is good enough. After all, other heroes with alternative options to exhaust, like Doctor Strange and Hawkeye, are doing so for very potent reasons. So is this event recursion good enough? Can event cards that need to be paid for every time completely take the place of basic powers? Is this concept strong enough to base an entire Hero around?

As it stands in the current game, I believe the answer to these questions is yes. Furthermore, as more cards get released for Champions, her ceiling will only rise higher and higher. Every new event is potentially a reason for Ms. Marvel junkies to get excited- just this month, Clear the Area lit a fire under portions of the playerbase who couldn’t wait to run it with Kamala, and it’s unsurprisingly amazing in her deck.

So yeah, the ID card packs a punch. It is good enough. And this is all before you even get to the Alter-Ego side, which is in the running as the most impactful in the whole game. 5 REC to 10 HP is an incredible ratio, the best available, and Teen Spirit is likewise killer, letting us fetch a Hero card for a functional 7 card hand where the 7th card is pretty much always good. The downside of discarding cards is usually negligible- our most important pieces are almost always going to be Ms. Marvel cards.

So we're already off to a good start for our Alter-Ego side, and if this wasn’t enough reason to flip down, a huge part of how the deck functions rests with her three supports- Aamir Khan, Nakia Bahadir, and Bruno Carrelli. They are all good and you will play all of them every game. Ahmir gives us even more draw and sets up the final hand of our deck into a potential combofest, Nakia gives us consistent discounts on anything we please, and Bruno lets us stash cards or resources that are overly situational at the moment. Or maybe you just use him to draw three cards you tucked away to help pay for a massive turn. These characters would be welcome sights for virtually any Hero, and Kamala is lucky to have them.

Which is so fitting, right? Kamala’s a teenager, still figuring out who she is, very much devoted to her family and friends. The pressure to go to Alter-Ego, to be normal for a minute to utilize these supports is one of the most heartwarming bits of theme in all of Champions. Mechanically, this gigantic pile of utility available in Alter-Ego means that Ms. Marvel wants to flip virtually every turn. This helps her set up brilliantly for big, fat Hero turns- and oh boy, can Ms. Marvel take over the player phase like almost nobody else when she sets herself up properly.

Ms. Marvel is the game’s greatest firefighter. Imagine a situation on a board that’s really bad- a massive minion, a nasty side scheme, a huge influx of threat on the main scheme. Now imagine that whatever the most relevant card in your hand is to deal with that problem, you get to do it twice.

This is why we're here. She offers tremendous burst that can very often be pointed straight at the most threatening thing. Don’t get me wrong, there are occasionally times where you don’t actually have that right answer in your hand, and that can lead to some dead turns or moments where you’re tempted to miss playing somebody more conventional. But there will always be moments where she saves the day, and they are a blast.

Often, the cards that save the day will be her own.

Those events are amplified considerably by Shrink and Embiggen!, the cards that in many ways are the nucleus that her deck revolves around. They’ll pay for themselves quickly, of course, but their real potency is in the way they tend to help events trigger additional effects. Stealth Strike becomes more reliable, Melee famously gets double-boosted, the previously mentioned Clear the Area gets the draw more often, etc. Any time an event could benefit from additional firepower, Shrink and Embiggen make Ms. Marvel an obvious go-to deck to not just build around it, but to abuse it.

There are plenty of events across all the aspects that Ms. Marvel can elevate substantially. Leadership, however, offers a notable exception. It's not that she's bad in Leadership (hardly any hero is, really- at the time of this writing, the power level of Leadership is actually mildly problematic...), it's just that she's not really bringing much to the table in terms of synergies. Ms. Marvel Leadership is one of the few bum aspect pairings in the game, and while a few more excellent blue events might change that, for the moment it's the aspect we see her playing the least.

There’s a lot of strength on tap here, but for a lot of players that won’t be main draw. A huge part of the appeal is that Ms. Marvel's ID card is distinctive, holding the honor of being the first Champions hero that plainly cannot be expected to play remotely like any of the others. Piloting Kamala is a unique experience, and while some players will be drawn to it, in my experience this is also the Hero most likely to have a player not even want to try her. This isn’t helped much by the fact that she’s not yet the kind of household name that many other early heroes enjoyed being, despite having one of the most well-regarded comic runs in Marvel’s recent output.

And while every player is going to have favorites, this reluctance to give her a spin is a shame, and not only because Kamala is a wonderful character. In a universe full of iconic heroes that Champions has given tabletop life to, Ms. Marvel stands out. There’s something truly special about this intersection of card design and character. Expect to routinely see Ms. Marvel decks shoot to the front page of this website as new cards give deck builders cause to figure out new ways to stretch her to the limits of what our little card game can offer.