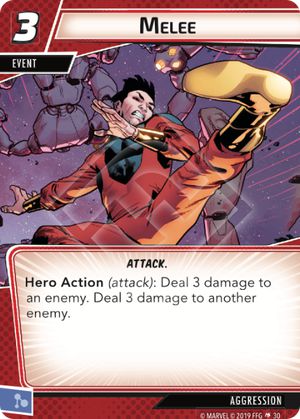 Q: Can Melee deal damage to the same enemy twice?

A: No. When Melee deals damage a second time, that damage must be dealt to an enemy that is different from the first. -(Official FAQ)

Q: If I am stunned, can I discard the stun status with the first instance of damage and still use the second instance to deal damage to an enemy?

A: No. Melee is one attack with two separate targets. You resolve the damage separately, but it is still a single attack. That means that if you are stunned, playing Melee will only remove the stunned status card and nothing else. -(Developer Ruling , Hall of Heroes)

A: Yes. You resolve each line one at a time, meaning that if you defeat a guard minion with the first line you can target the villain with the next line. -(Developer Ruling , Hall of Heroes)

Q: If the first damage from Melee defeats the current Villain Stage, can the second instance of damage hit the next Villain Stage? (Are the different stages considered different enemies)

A: No, different stages of the same villain are not different enemies. -(Developer Ruling , Hall of Heroes)

Q: Can I use Superhuman Strength to give Melee stun and stun two enemies?

A: Superhuman Strength says “Stun the attacked enemy” singular, so choose one of the enemies you attacked with melee and stun that one. -(Developer Ruling , Hall of Heroes)

No review yet for this card.