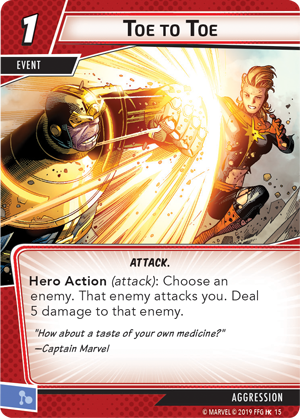 Q: Will I sill do 5 damage if the enemy is stunned and did not resolve an attack?

A: Toe to Toe does not require that the chosen enemy resolves an attack against you in order to deal 5 damage. So if the enemy is stunned, you will still deal 5 damage to it after it removes the stunned status. -(Developer Ruling, Hall of Heroes)

Toe to Toe is not for the unprepared and faint of heart, but it can be a staple card for aggression decks that employ layered strategies. In general it has 4 major situations where you'd use it:

1) Minion Control - this is a cheap way to eliminate low attack minions from the table. Combined with retaliate, it take out most HP bags. Spider-Girl also has a lot of synergy with this card.

2) Counter-attack Trap - Counter-Attack from the Black Widow pack is a card that can be set-up before it's you use Toe to Toe not only on the same turn, but as a late stage play in a previous turn. This combo can be use on larger minions with moderate attack, or the Villain themselves. Captain America or Spiderman are the best choices for this strategy as CA has retaliate for additional damage, with Shield Blocks and Captain America's Helmet for emergency stops, and Spiderman gets extra card draw and back-flip emergency stops in addition to being an AE flip away from healing back up to fill. This is it's most efficient use.

3) Stun-lock Supplement - In decks with layered amounts of Stuns (Dropkick, Mocking Bird, Hero Kit Stun) you often find yourself able to stun multiple times in a single turn. Generally this would go to waste, but Toe to Toe is cheap enough that it can be played in between a pair of Drop Kicks or the like, allowing you to avoid the precursor attack AND the Villain attack coming from the next round. This is it's safest use.

4) Aggression/Protection - As of the time of this type up, Spider-woman is the only Hero option that can pull this off. But with Protection cards like Indomitable, Unflappable, Electrostatic Armor in play and options such as Counter Punch, Preemptive Strike and Desperate Defense in your hand, Toe to Toe can not only deal it's 5 damage, but provide all the bells and whistles a defense action warrants in this situation, while getting the stat buffs from playing cards from both aspects

As a general practice, this card should be considered by retaliators, those that struggle with minion control, and heroes that have good inherent healing, hit points, or damage mitigation methods. With proper deck-building, defeating a villains on turn 3 isn't uncommon