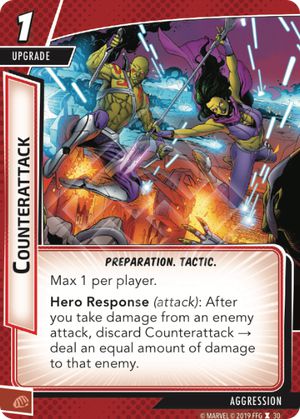 Of course this works decent with Black Widow Aggression, but it is riskier with her having low health. I would only recommend you put this in Black Widow Aggression decks if you also have Endurance down to give her more health buffer. If you have Down Time as well that will allow you to recover and flip back quicker. Counterattack is a really good card to have in a high HP hero Aggression deck like Hulk or Thor or She-Hulk. Remember that it's not forced, so you can save for when the villain really brings the heat to dish it right back at them on their turn. It's cheap too, so it works better for Thor and Hulk to get down as well.

DoxaLogos · 162
I am totally with you! Only thing I have to add, here on MarvelCDB the cost of the card is wrong. As you said it is a cheap card (cost 1). — m.Trae.b · 8 8/9/20
Yes, I submitted a bugfix yesterday with the correct cost. It should show 1 now. — DoxaLogos · 162 8/9/20
Aggression is probably the last deck I would build BW around. She's so much better suited for Justice, and there are much better aggression heroes. This card is better suited for heros that can afford to face tank a big hit; it's great for Hulk or She Hulk aggression. — ecamel · 11 8/17/20
Like I said, get her Endurance and Down time to help her out. It works. I've put a beat down with her in Aggression and those cards. It's fun. — DoxaLogos · 162 8/18/20
Maybe I'm a diehard min-maxer, but I just can't see doing that hen she's objectively worse at it than other heroes with bigger health pools and higher attack. I respect your opinion tho, if that's how you enjoy the game, go for it. Just not for me. :) — ecamel · 11 8/18/20
No problem, ecamel. Too each their own :) — DoxaLogos · 162 8/22/20
Black Widow/Aggression has a lot going for it, but it's about balancing out weaknesses more than maxing out strength. Many Aggression decks struggle to deal with schemes, but with Covert Ops and Winter Soldier you have pretty good threat control. Grappling Hook cancels treacheries, so then you only need a way to clear out minions, and red cards are excellent for that. Tigra and Relentless Assaults round out Black Widow nicely. — OrionJA · 7 8/25/20
Orion, I would really only consider that a benefit if playing solo or with another deck that can't thwart particularly well. You say it's about maxing strengths and not balancing weaknesses, but BW seems to be more of a balancing weaknesses choice rather than playing to max strengths. — ecamel · 11 9/1/20
Yeah, that's what I said, it's about balancing weaknesses. I play a lot of 2-player games, and although you can assign one player to manage threat and another player to deal damage, I find it helpful for both players to be flexible. I play a lot of Mutagen Formula and you never know what will happen when you have to reveal 6+ cards in one turn. Sometimes you get a nice mix of schemes and minions, but sometimes you get crushed by 4 schemes at once, and in those situations it's great for both players to have strong thwart options. — OrionJA · 7 9/4/20