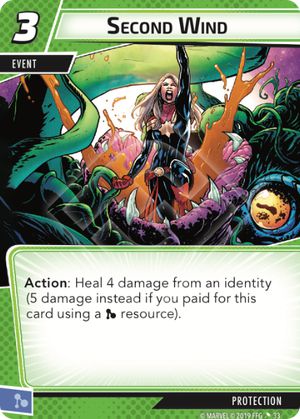 This card is dramatically inferior to Medical Team, which has the same cost and the same aspect.

First, Medical Team can heal allies, which is much more efficient than healing identities. Once you have an ally in play with THW 2 and HP 3+, it is just crazy efficient to just keep healing that ally over and over again. When you have Medical Team, your hope is to use it to heal allies. Sometimes the game situation forces you to heal identities instead, and that is OK, but it isn't the most efficient, there are other ways to prevent identities from suffering damage or to Recover large amounts of hit points at once. Second Wind can only be used for this secondary purpose of healing identities, it can’t be used for healing allies at all.

So you would expect Second Wind to be much better than Medical Team at its specialty of healing identities, but actually it isn't any better at all, and may not even be as good. Second Wind can heal maybe 4.8 hit points average, while Medical Team can heal 6 hit points. Second Wind does have the advantage of healing all at once, but this advantage isn't all that great, healing isn't one of those things you desperately all at once. Sometimes you do, but mostly you get beaten down over multiple turns and there is plenty of time for a Medical Team. And even if you do need the healing all at once, you probably don't draw the Second Wind on that exact turn, you are better off with a Medical Team you were able to play on a previous turn and leave in play. And being slow can even have advantages since Medical Team lets you heal small amounts (perhaps from minions or left over after recovering) and can be split among multiple characters who each only need a little bit of healing to make sure they survive the next villain attack.

In summary, Medical Team is at least as good as Second Wind at healing identities, and has a much more efficient use of healing allies, so it is far superior to Second Wind. Even if you ignore this fact, Second Wind is still kind of a disappointing card because you are probably only healing the damage from roughly one attack of the villain, and paying a very high price for it, you just can't afford to spend most of your hand reacting to a single villain attack. And for that cost you could be purchasing an ally who can also absorb the damage of a villain attack, and can do other cool stuff on top of that.

The Key to this card is the fact it is an "Action" and not a "Hero Action". Allowing you to heal other players while getting the superior card draw from AE mode and set-up your own board is this card's big strength

As of this listing, there are two heroes who should likely be putting this into a Multiplayer Protection Build: She-Hulk and Wasp.

She-Hulk is already looking for Mental symbols for Superhuman Law Division. Her +2 cards in AE mode gives her a lot of incentive to create builds to take advantage of that, and between her AE ability and Superhuman Law Division, it's easy to maintain a 3 threat reduction off the main scheme every turn. This card allows her to act as a pocket healer but still swinging up to do burst damage like She-Hulk likes to do in Hero mode.

Wasp loves Mental symbols, and operates in a tool kit style. She is able to reshuffle Second Wind back into the deck when ever the board needs it. Her ability to also shuffle back in copies of Perseverance in conjunction, gives her the opportunity to heal herself or others and flip up with a Tough token. With other great cards like Pin-Point Strike and Giant Help grabbable by GIRL as well, you're able to reload on your most needed cards to take care of any situation.

Earth Dragon · 1140
Spider-Man is also a good option for this card since he can generate a Mental resource in AE form. — Nuke_Dukem · 8 4/12/21
Black Panther might also consider it. The Golden City draws 2 cards as an alter-ego action which makes him hungry for things to play outside hero form. — OrionJA · 7 4/24/21