This is extremely good value!

This deck started out life as a Repurpose deck but, with allies like these and cards like Lightning Bolt, Storm has all the tools she needs to conquer her enemies.

At the time of posting, this deck has defeated annihilated several villains including:

If you like this deck, feel free to give it a ❤ ! Thank you! 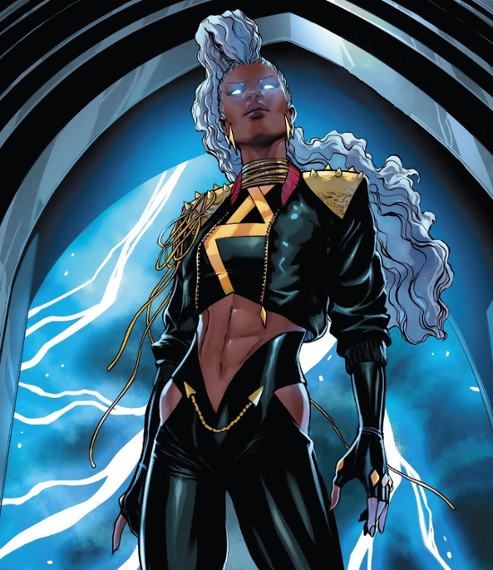 This deck is all about the electrifying damage Storm gets from allies thanks to Thunderstorm alongside Protection’s ability to shore up her poor starting defense. While the +1 from Thunderstorm might not sound like much, it really adds up across a whole game - especially when it’s raining Multiple Men!

While Aggression and Leadership can get more damage out of their allies, the Protection allies handle Storm’s defense so efficiently that she’s free to go wild and unleash the full wrath of the elements!

Thunderstorm's bonus also applies to Storm, so with Storm's Cape she is potentially bringing 6 damage from two basic attacks every turn - plus 2 damage from Thunderstorm's special! Blast of Wind decimates minions when you’re swarmed and is still a great play when there’s only one, and Lightning Bolt is just overwhelmingly good.

With a potential of 5 damage or 3 threat removal on turn 1, and potentially 8 damage and 6 threat removal with her Crown/Cape with upgrades - all just from her hero card/weathers - you’re ready to deal with almost anything the encounter deck throws at you before playing a single card in your hand.

This means her only real weakness is her early defense, starting with just 1 DEF and 10 hp. And that’s why you need to call on Storm's power to make it rain! Not Torrential Rain, but to make it rain Multiple Men!

Multiple Man is the reason behind the deck’s name and the optimal Turn 1 play. With Thunderstorm, he brings 6 damage and blocks 3 villain attacks for the cost of 5 effective resources (4-cost + the card itself). Even if you draw two Multiple Men in your opening, it’s hard to beat this kind of value.

A Tough/Stun/chump block is usually valued at 2 effective resources. Damage can vary, but ideally 2 damage is worth 1 resource such as Skilled Strike or Swinging Web Kick. In other words, 6 damage and 3 blocks for 5 resources is an insanely good deal - almost half the cost it should be!

You only really have one window to play Multiple Man per deck pass as, once one is in the discard pile, his worth is drastically reduced. Two Multiple Men are still good, but why put out two when you could have had three? Make! It! Rain!

Iron Fist comes in next, providing 8 damage and 3 blocks for 5 effective resources. While he provides more total damage than Multiple Man, his damage is less valuable because - if you want to use his blocks (stuns) efficiently - you have to hit the villain, and thus he doesn’t offer any minion control. Yet, under the pressure of your other Thunderstorm-boosted allies, putting 8 damage on the villain really helps push the game to a close.

Brother Voodoo doesn’t bring as much damage, but he does provide efficient thwarting to free you up to focus on damage - and, most importantly, he helps you find the perfect event for whatever situation you’re faced with.

Professor X doesn’t want to join in with the Thunderstorm shenanigans at all but offers so much value by controlling the villain. By blocking, then taking advantage of a confuse, he stops two activations and can thwart for 3 while he’s at it. And even if the villain is steady/stalwart, he can just ready you up for another 3 damage instead.

Combining all these allies, you have a potential to block 14 villain activations per deck cycle. While you won’t actually hit that many in a deck pass, the point is you are effectively invincible behind them while they go crazy with boosted damage.

Using your Allies + The Mulligan

This deck can be a tempo deck or a control/build deck. It largely depends on your play style, but also the scenario and what cards you draw. Sometimes you find key upgrades early but less damage, and other times Lightning Bolt whispers sweetly in your ear and suddenly the villain is on their last legs!

As mentioned, Multiple Man is ideal on Turn 1 against most scenarios. In solo, he provides three villain turns’ worth of blocks while providing great coverage against early minions. Although you won’t set up much during a Multiple Man start, you will have extremely efficient blocks ready to give you more value in your next few turns.

Your mulligan priority is to find Multiple Man. If you start with him, I would advise against a mulligan at all - you increase your chance not only to find another Multiple Man and lower his value, but find a good upgrade/support that you can’t afford to play alongside him.

Otherwise, Storm's Crown is your most important upgrade followed by Storm's Cape, The X-Jet, Helicarrier, and then Deft Focus.

After Multiple Man, Iron Fist is your next best ally. He’s even good value against steady opponents! And then it’s Polaris. Focus on playing these “three” allies every deck pass if possible - they give you 20 damage and 8 blocks for 14 effective resources.

Professor X comes in next as another excellent play, especially on turns with a side scheme or if you’ve accumulated some threat on the main scheme. In the worst case, he’s still good value if you ram him into the villain since Thunderstorm gives him +1 ATK! This is by far the worst but most satisfying way to deal the final blow.

Colossus, Angel, and Brother Voodoo are great but I wouldn’t recommend playing them over the others unless you also have a key upgrade/support in hand that you can only afford to play alongside them rather than a more expensive ally. But, in the absence of anything else vital, they are absolutely amazing plays. Allies make this deck what it is.

Due to Storm’s high cost curve, you are sometimes inevitably left with a spare card in hand.

This is where Assess the Situation and Plan B shine.

Plan B speaks for itself - if your spare card isn’t Assess the Situation, throw it into Plan B for bonus damage. This can also help eliminate minions or pop Toughs. While Plan B is your least vital upgrade/support, it’s still very good.

The X-Jet, Helicarrier, and Deft Focus speak for themselves. Combined with Storm's Crown, you can have 4 resource generators in play! While this is often excessive, having this many helps you find at least one early for major value through the rest of the game.

And lastly, while these are the least valuable cards in the deck (Storm’s own hero events are just too good), Hard Knocks and What Doesn't Kill Me provide great coverage.

Hard Knocks comes in handy when you find yourself overwhelmed by minions and under pressure as an emergency damage option. Also, having another 3-cost attack is excellent against Venom Goblin’s Advanced Glider. And, if you do find yourself with an abundance of blocks when incorporating the Toughs you get from this card, you can start to use your allies’ last hp to attack!

What Doesn't Kill Me provides 2 healing and 3 damage while you are in the Thunderstorm weather. (Or 2 healing and 2 threat removal with Storm's Crown.) While this value pales compared to your allies, this card is very flexible and offers you your only source of hero-form healing in the deck. It’s also helpful to ensure you can remove those pesky attachments/obligations that require you to exhaust.

As I mentioned at the start, this deck started out life as a Repurpose build! You can restore it by replacing 2x Hard Knocks, 3x Assess the Situation, 3x Multiple Man, Brother Voodoo and Plan B with 3x Repurpose, 3x Energy Barrier, 1x Plasma Pistol, Utopia, Nightcrawler and Forge.

Personally, I found that Storm can do so much damage herself and with allies that it wasn’t necessary to rely on Repurpose, especially given how little damage she takes with these allies. She just wasn’t triggering Energy Barrier (or, in earlier versions, Forcefield Generator). But it was still a fun and powerful deck!

Against Venom Goblin, you can substitute 1x Assess the Situation for 1x Hard Knocks as extra insurance against that blasted Advanced Glider.

Against stalwart enemies, you can replace Iron Fist with Luke Cage.

Good luck and have fun!