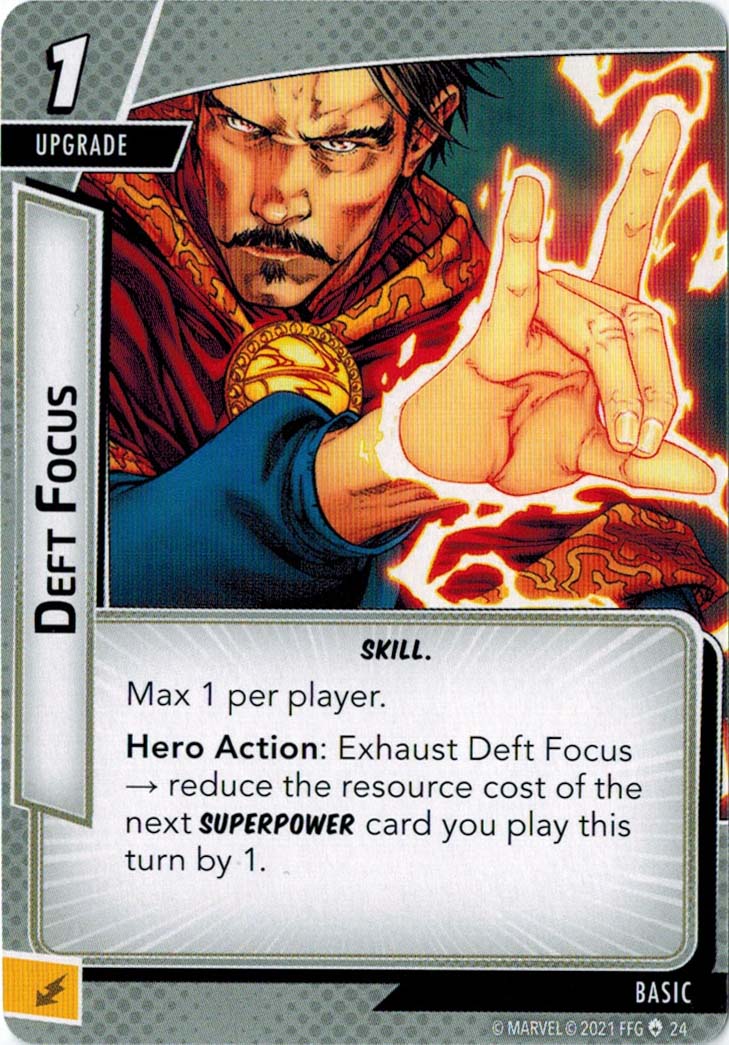 Edit: Fixed some numbers because of cards pointed out by commenters where timing doesn't quite work. Updated with new heroes up through Ironheart/Nova.

This is the strongest, though most restrictive, non-hero resource generator we've seen yet due to is low cost of only 1 resource. All current Superpower cards are hero cards (except Invulnerability, which is horrible), so you can't actually build a deck around Deft Focus, but some heroes will benefit from it more than others. (This may be changing in the future. The recently spoiled Sp//dr has a few protection aspect cards that are superpowers)

Here is a list of heroes ranked by how many of their cards can take advantage of Deft Focus. Obviously, this excludes cards like Fruition or Speed of Light that are Superpowers but zero cost. Some superpowers that are interrupts during the villain phase are also not counted since Deft Focus is used as an action, not a resource.

Tier 1: close to an auto-include

Nova's count is high, but if you consider how Nova plays, Deft Focus is not actually necessary. 6 of these cards are Pot Shot and Lightspeed Flight, which get paid for by Supernova Helmet or Connection to the Worldmind...no need for a cost reduction of 1 if the resource you are paying gets doubled automatically. Also, the 8 count doesn't include Forcefield Projection, which is mostly meant to be played in the villain phase but could have some niche uses with Toe to Toe or retaliate villains. So I would understand if a Nova deck does want Deft Focus, but it is not an auto-include just because he has 8 superpowers.

Hope you like my breakdown, and let me know if you've tried it and found success with the lower count heroes...especially Nova!

Stretch22 · 183
Hey! I like that you took the time to count everyone of them, thx! This will be useful! — neothechosen · 4529 4/13/21
Scarlet Witch only has 4 cards that benefit from Deft Focus, because the timing doesn't allow you to use Deft Focus on Warp Reality. — OrionJA · 5 4/24/21
I think it won't work for SpiderMan's 'enhanced Spider sense', since you can't do a Hero Action (like Deft Focus does) in the villain phase, so it's 3 for Spidey — warboykurgan · 1 5/4/21
Good analysis, but wanted ot note that for groot specifically, the number of superpower cards is misleading and IMO he's closer to tier-2 for this card. Out of those 12 card, 5 are upgrades which you might play once only (if at all) and 1, fruition, is 0 cost and doesn't make use from deft focus. It is a useful card for groot, if you get it out early, but it's nowhere near the level of use quicksilver gets out of it... — 6crows · 1 10/31/21
Vision seems like a clear Tier 1 hero for this card as well, he has a grand total of 10 superpower cards that can be targeted with this. — TomasLoow · 1 3/8/22