Web-Warriors of the Galaxy (Expert Slayer)

Welcome to my Star-Lord (or should that be Spider-Lord?!) deck!

At the time of posting, this deck has beaten:

(While I have not tested this at 4-players, Star-Lord only gets better at higher player counts.)

If you like this deck, I would really appreciate it if you gave it a ❤! Thank you so much!

Why are Star-Lord and the Web-Warriors working together? 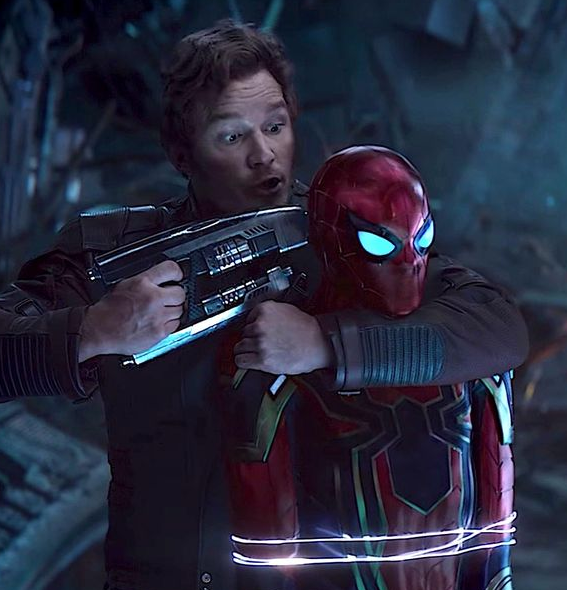 Why is this deck so powerful? Let me highlight just a few combos:

Knowhere + Web of Life and Destiny + SP//dr = all the cards you could ever dream of. (Star-Lord makes SP//dr a Guardian.)

In other words, once you have your board setup, you can deal with almost anything before even looking at your hand. And your hand will be full of cards. You will have the flexibility to deal with anything - and to do it in style.

After that, the galaxy is yours to conquer. Many of these cards combo, with cards like Gamora, Ghost-Spider and Blaze of Glory combining with Daring Escape and Sliding Shot to end the game. Spider-Man (Otto Octavius) and an Element Gun. And Star-Lord's "What Could Go Wrong?" ability is perfect for all the 3-cost Web-Warriors and Web of Life and Destiny.

Step 1: Web-Warriors of the Galaxy

(It’s worth noting that, while I don’t mention them a lot in the rest of this guide, your non-Web-Warrior allies remain excellent additions to the deck even when your WW cards are playable and should keep being played.)

Most of your Web-Warriors cannot be played without a Web-Warrior card in play. There are multiple ways we navigate around this - the primary way is to play Web of Life and Destiny, and this is a priority card for the deck. You can also play Spider-Man (Peter Parker) without any other Web-Warrior card under your control.

However, you can also Make the Call for any Web-Warrior in your discard pile. Make the Call has you “put that ally into play”, bypassing the actual act of playing it.

Between Make the Call, Web of Life and Destiny, and Peter Parker, that’s five cards that can bring your deck online - and each card is also amazing on its own when you don’t need to worry about enabling Web-Warriors.

Other than enabling your Web-Warrior cards, you will want to prioritize finding and playing Knowhere, Star-Lord's Helmet, Leader of the Guardians, and at least one Element Gun. The Element Gun guarantees damage and combos extremely well with Spider-Man (Otto Octavius), Leader of the Guardians gives you so much thwarting, and Knowhere + Star-Lord’s Helmet are a big part of your crazy card draw engine.

There are too many amazing upgrades/supports to play early, so prioritize and play them as you go.

You’ll have to use your judgment on whether Star-Lord’s “What Could Go Wrong?” ability to help put these in play. I usually do on turn 1 to get more benefits across the span of the game - the earlier an upgrade is in play, the better - but it’s not always wise. Learning when to use it is just part of learning to play Star-Lord, but in general? The more allies you have out to block/deal with threats, the safer it is to use.

Once you have Knowhere, you’re basically getting an extra card every turn due to the sheer amount of allies in this deck. You’re always playing one from hand - especially once you find SP//dr who guarantees it.

And with Leader of the Guardians in play, SP//dr becomes 1 damage/3 threat removed every single turn - again, effectively for free.

While Knowhere has to exhaust, Web of Life and Destiny does not. That means that every Web-Warrior ally that leaves play is going to draw you a card. So, while you want to ensure you have an ally to block the villain’s attack, it’s a completely valid choice to use the last hp of a Web-Warrior to attack or thwart. It also means you profit from blocking for other players more than most.

It has not been unusual for me to start the villain phase (or even the hero phase) with 4 allies on the board, and end the hero phase having played 4 fresh allies. Insane card draw, Make the Call, and Across the Spider-Verse makes this both viable and easy! (Prioritize Web-Warriors, but don’t be afraid to grab a normal ally.)

Let’s not forget Spider-Man (Otto Octavius) who also draws a card when played from hand, by readying your Element Gun. And Ghost-Spider who finds an identity-specific event too - more on her later.

Once you have a bunch of allies cycling in and out, you can really start to take advantage of Star-Lord’s kit. When you can block multiple attacks, clear multiple side-schemes, or annihilate any minion in sight? Encounter cards barely matter anymore. And the more encounter cards you take, the bigger your handsize is thanks to Star-Lord’s helmet.

You’ll draw so many cards with this deck that you’ll often have an encounter card just sitting in front of you anyway. He has plenty of 3-cost cards in this deck to efficiently use his “What Could Go Wrong?” ability on, and with Leader of the Guardians prioritized, Daring Escape can get a lot of value.

What all this means is, when you want to, when you’re ready to, you can unleash some absolutely devastating Sliding Shots to annihilate the villain. And even go for big Gutsy Moves if the scheme went out of control following a previous round of multiple encounter cards.

Ghost-Spider and Blaze of Glory are also excellent additions to Star-Lord’s burst potential.

Ghost-Spider can draw you an identity-specific event from your deck, as well as just drawing a card from Web of Life and Destiny. What this means is, she can find you Sliding Shot or Daring Escape when you already have other pieces in hand to benefit it! If you have her on the board and feel like it’s time to end the game, keep her at 1 hp until you draw a few Sliding Shot/Daring Escapes to maximize the combo.

Due to how much card draw you have, it won’t be unusual to find Blaze of Glory right when you need it. Blaze of Glory gives you and all your allies +2 ATK! Combine this with Daring Escape, and Star-Lord is hitting for 4 damage multiple times. Then, add in a Sliding Shot after that, and no villain can survive when played solo - and few likely in multiplayer at this point.

You can also pull the trigger on these combos earlier if the board has gone crazy. It’s okay to take three random encounter cards to deal with three bad ones from the villain turn that you can’t shake off.

Always be ready with this~ I’ve casually drawn a hand of cards, not even thinking I’m close to winning, and then thought “Hm, I actually have some good damage cards here…” - and proceeded to do 70 damage to win out of the blue.

When things line up, villains fall down.

While I mention it at times for the absurd value they give, in general I have not included the increased value allies give due to Knowhere, Web of Life and Destiny, and Leader of the Guardians. All allies should be considered as potentially benefiting from them.

Should you wish to tweak the deck, there are some great options and there’s definitely room to explore. Spider-Man (Hobie Brown) and Clarity of Purpose are the least important cards, in my opinion, and thus the ones best swapped if necessary. Mockingbird should be swapped out too if you are up against a Steady or Stalwart villain.