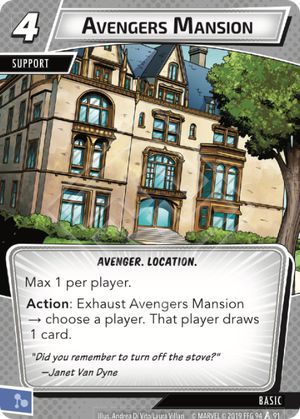 This card is best played early on, but it can still bring value when played in the mid to late game. Some players only consider playing this card if they get to use it 4+ times. It's expensive for sure, but focusing solely having a card that "pay for itself" is misguided. Playing this card in the late game just might give you a card draw the following round that allows you to win the game. At that point, will you care that it didn't draw enough cards to pay for itself? Nope.

Granted, most of the time you'll have better cards to play, but it's not useless either late game. I found myself in a late game situation with She-Hulk where I drew a relatively bad hand, except for Avengers Mansion. I played it, and sure enough, on the next round, it allowed me to draw a Gamma Slam instantly win. You certainly don't want to rely on the hope of a lucky card draw to win, but sometimes playing this is a good option when you can't do much else.