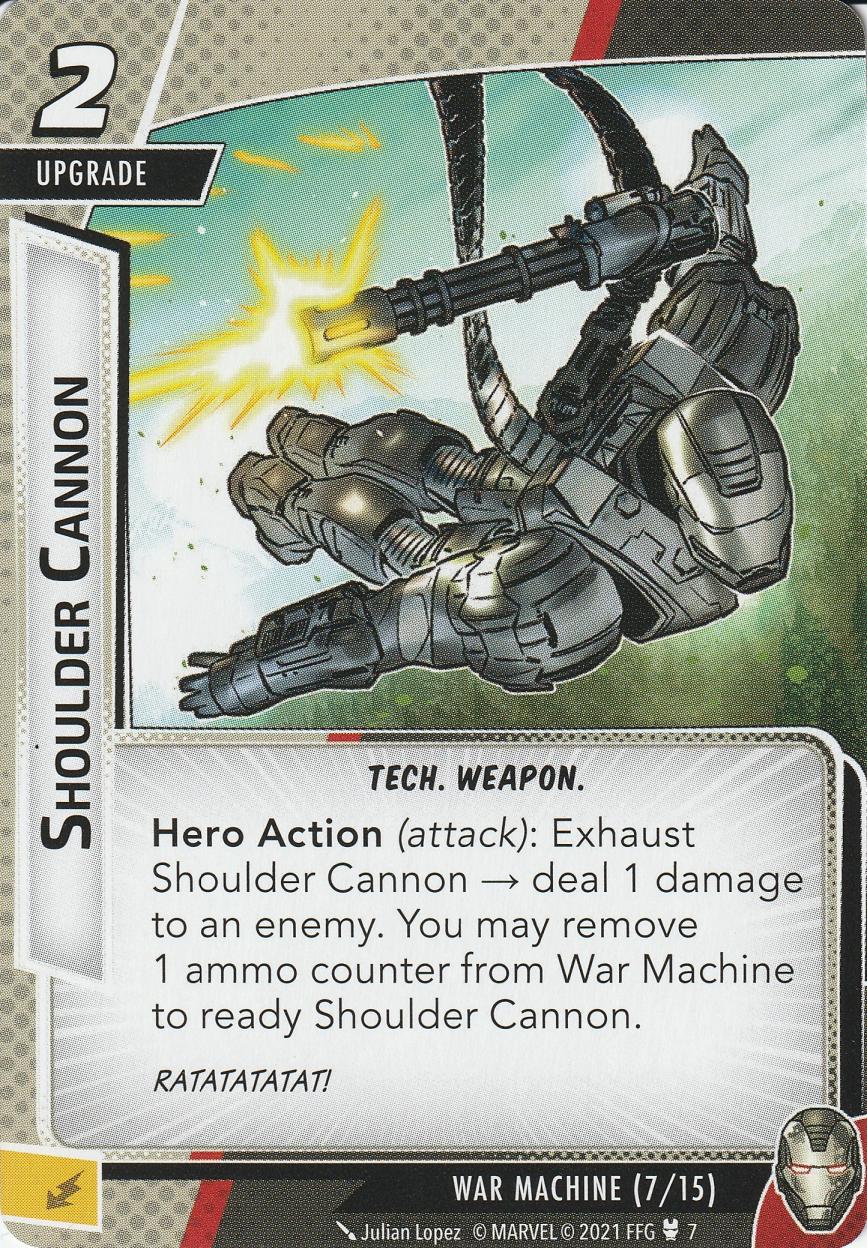 If I'm reading this correctly, it allows you to deal 1 damage every turn you're in hero form, and also converts all your leftover ammo to damage 1:1 every time you flip back to alter ego. Combined with Munitions Bunker, you can stockpile some pretty ridiculous amounts of damage, accessible whenever you'd like. I think it's probably War Machine's biggest strength, the ability to on-demand nuke the final phase of a fight.

Sure, other cards like the Missile Launcher convert ammo to damage more efficiently, but for resources paid and burst damage (and pure flexibility), Shoulder Cannon is a monster.

just don't run into an enemy with Retaliate.

AradonT · 23
A quick note about Shoulder Cannpn: You don't need an Ammo counter to use it the first time each turn! Unlike Rhodey's other equipment, you can use this even if your reserves are running dry (or you want to save Ammo for other cards). — Judicator82 · 55 2/7/22
0

When seeing the previews for War Machine, the Shoulder Cannon drew the most attention. A repeating ping for 1 sounds amazing! Never a wasted damage! Build a mountain of counters and demolish the Villain in one turn!

In actual play, you'll find that burning all of your Ammo with the Shoulder Cannon is situational in practice. War Machine's biggest mechanical 'weakness' is that Ammo counters are hard to come by for the first half of the game, where you are still putting Munitions Bunker and your Gauntlet Guns into play. Every other War Machine Upgrade and Equipment is more efficient in their conversion of Ammo than this, and you are better off spending your counters on Repulsor Beams, Missiles, and Targeted Strikes.

I find that War Machine doesn't really want to flip every turn; realistically he flips about as often as any other hero (once every few turns). You could build something where he flips every turn, but that is likely not his strongest approach without serious thwart support.

There is one amazing saving grace for this card: it pings for one damage without ammo every turn. A free damage every turn is no joke, go ask Ant-Man and his Army of Ants.

Shoulder Cannon is a great card but not always an autoplay; it requires some thoughtfulness as to when to play it compared to Missile Launcher.

My rating is A: a great signature card that is almost always worth playing.