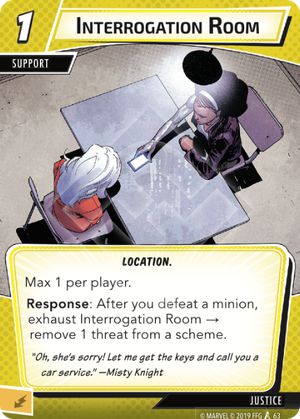 This is one of those cards that seems to be villain situational. In a scenario with Rhino, you don't really have that many minions. In a scenario with the other two villains those chances go up. I would include this as a single copy in a Rhino game and multiple copies of it in a villain set that has more minions.

Since more cards are drawn from the deck in multiplayer games, you will see more minions on the field. It doesn't matter if the minion is engaged with you or not. It just matters if you take them out. So, with three other heroes this card's usability goes up considerably.

A situational card for me that goes from 1-2 copied, but I don't think warrants a third since you can only have 1 per player and the other 2 would be dead cards.

Bronze · 180
I have some issues with "you"... It has to be the hero who defeats the minion, or could be an ally? (I'm thinking in ubfflapable, for instance...) — btheone · 1 5/6/21
As per the RR 1.4, "you" means your ID, your upgrades, your resource cards (in case that ends up mattering) and your events. Allies and Supports don't count. I still like Interrogation Room, because it rewards you for doing something you'd wanna do anyway - you're gonna want to get rid of those minions eventually. — Blackhaven · 1 5/13/21