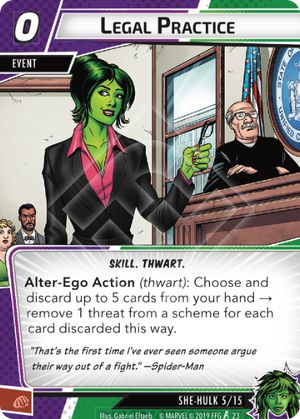 A: No. All of the threat removed by Legal Practice must be removed from a single scheme. -(Official FAQ)

I think it's fair to say that Legal Practice is very arguably the worst Hero card in the game. Giving a Hero the ability to remove threat on Alter-Ego is certainly powerful in concept and it follows that the payout should possibly be lower or the risk higher, but in practice (heh) Legal Practice is far too costly, especially in a Hero who is already gimped by a small hand size. The best case use for this card is as an Emergency to prevent a main scheme flip, and it feels bad that a Hero card is barely situationally better than one of the worst neutral cards in the game.

Sadly, this card almost single handedly does more to hurt She-Hulk than even her Hero hand size. It's a dead card often, mostly used as a blank resource.

I would love to see this card errata'd to read "remove 1 threat from each scheme for each card discarded this way."

What this does is it leaves Legal Practice as a bad card to use simply on the main scheme, but it offers some massive scaling depending on how bad your situation is. With a single side scheme out, it's on par with Crisis Interdiction. With 2 or more side schemes out, you could even sacrifice your whole turn to significantly wipe threat from the board, which seems like a rightly strong thing for a Hero card to be doing, giving it the Jessica Jones effect of being more powerful the more schemes are in play.

ChaosTheory · 2202
So, I actually house ruled this change tonight and I think that the ability to deal with multiple problems with a single card is too good even if the threat per resource spent exchange rate isn't out of hand. For that reason, I'd say the better solution is to just change it from "remove 1 threat" to "remove 2 threat". That way it's not as flexible and more focused, but with the exact same exchange rate as For Justice and other strong Thwarting cards. — ChaosTheory · 2202 7/6/20
I agree, I think a 1 to 2 ratio makes a lot of sense. and it makes it stronger than For Justice at it's weakest, which is 3:3 (2 cost+the For Justice Card = 3: remove 3 with no mind spent) where this would be 3:4 (Legal Practice+2 cards = 3: to remove 4), but not better than For Justice at it's best 2:4 (Power of Justice+For Justice:4 threat for mind spent). I dig it and will probably print up a custom V-Card to reflect the house rule'd change — M3t4lB0x (TLM) · 2487 7/9/20
https://imagizer.imageshack.com/img924/8059/vMb1mD.jpg — M3t4lB0x (TLM) · 2487 7/10/20
After playtesting this house rule and consulting other players, I've come to the conclusion that "1 from each" probably scales just a bit too much to become too strong with higher card counts. — ChaosTheory · 2202 7/15/20
A better solution is to add "Remove 1 threat from a scheme, then " to the beginning of the card. That way it at least always thwarts for 1 even if its the only card in your hand, doesn't scale crazily, and is slightly better thwart to resource cost ratio. — ChaosTheory · 2202 7/15/20
I like it. I still think the trade off of nuking your entire hand and your entire turn to reduce big threat is a fair trade off, but I like this 2.0 errata as well. Like you said, by removing at least 1, it's not a dead card. — M3t4lB0x (TLM) · 2487 7/20/20
Couldn’t the change be as the other post on this feed? Remove a threat from any scheme for each card discarded. - so you split it up. It means you can ditch a side scheme you just have to get gone or control the board state by cherry picking what needs to go from where. — Mattythreenames · 3 7/28/20
1

Since this says remove 1 threat from A scheme for each card... does that mean I can split up the threat removal between multiple schemes/side-schemes?

I really like this stay-in-alter-ego alternate play style for She-Hulk, by the way. It might not be as "competitive", but it's a nice wrinkle.

Needs Errata to be from multiple schemes or 1 + X (instead of just X)...

DAVEzilla · 8
Agreed, it's super expensive as it is. You don't have to look further than the base set to see how poorly this compares to other cards. For justice removes 4 threat for a cost of 2, this removes 4 threat for a cost of 4. If it was 1+X then it would still be slightly more expensive to account for the versatility. — L3w15 7 · 8736 4/22/21
She-Hulk, sadly, has a few unexciting cards. Even though I love this hero, I have to admit that Legal practice isn't good. Also, I believe signature cards should be better than basic cards / aspect cards, so it should beat To the rescue but it doesn't... how sad. — neothechosen · 6409 4/23/21